Detect if MongoDB is installed

Open a terminal, if you don’t know what a terminal is, read the tutorial What’s the Terminal?. Enter the command mongo or mongosh.

If you have MongoDB installed, you will enter the MongoDB shell. Press Ctrl + C (or Command + C in macOS) to exit the shell.

This section is based on the official MongoDB documentation. You can also watch this video to install in Windows 10.

Disable Hyper-V if you want to install MongoDB on Windows using VirtualBox.

Once installed, open a new terminal and run mongo again. If you get an error like the one below, it means you didn’t set the environment variable. To exit mongo, press Ctrl + C.

Follow this tutorial to add a C:\Program Files\MongoDB\Server\5.0\bin\ value to your PATH environment variable. 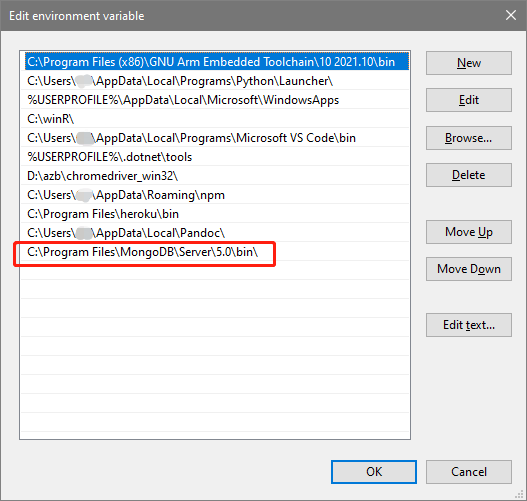 After you set the PATH environment variable, please open a new terminal, and run mongo again. If you did all the steps correctly, you can enter the MongoDB shell.

This section is based on the official MongoDB documentation

The .msi installer does not include mongosh.

This section is based on the official MongoDB documentation.

The MongoDB Database Tools are a collection of command-line utilities for working with a MongoDB deployment. The Database Tools include binaries mongodump, mongorestore, bsondump, mongoimport, mongoexport, mongostat, mongotop, and mongofiles.

If you are missing these tools, please refer to here to install them. Please use the Zip Archive method to install, put the files in the bin folder in the zip archive into the bin directory in the MongoDB installation path, which is located in C:\Program Files\MongoDB\Server\5.0\bin\ by default. 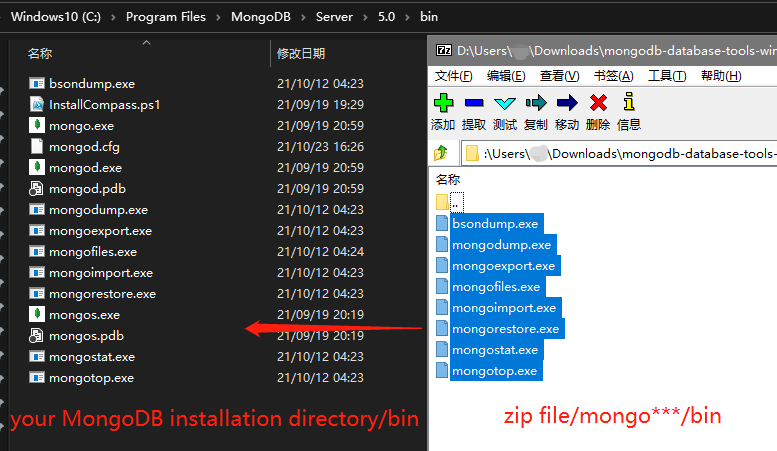 This section is based on the official MongoDB documentation.

If you are using an older version of macOS, please install an older version of MongoDB Community. Please do your own research on how to install it, or use the version drop-down menu in the upper left corner of the current MongoDB document to select the documentation for that version.

Follow these steps to run MongoDB Community Edition. These instructions assume that you are using the default settings.

Both methods use the mongod.conf file created during the install. You can add your own MongoDB configuration options to this file as well.

macOS may prevent mongod from running after installation. If you receive a security error when starting mongod indicating that the developer could not be identified or verified, do the following to grant mongod access to run:

To verify that MongoDB is running, perform one of the following:

You can also view the log file to see the current status of your mongod process: /usr/local/var/log/mongodb/mongo.log.

Connect and Use MongoDB

To begin using MongoDB, connect mongosh to the running instance. From a new terminal, issue the following:

macOS may prevent mongosh from running after installation. If you receive a security error when starting mongosh indicating that the developer could not be identified or verified, do the following to grant mongosh access to run:

The MongoDB Database Tools are a collection of command-line utilities for working with a MongoDB deployment, including data backup and import/export tools like mongoimport and mongodump as well as monitoring tools like mongotop.

It should start up, connect to your running mongod, and start reporting usage statistics.